Today I found something really neat in Larceny's foreign function interface. The deal is that often times you need to parse a C structure or a preprocessor definition, and man, parsing C makes a body feel lazy. What's a hacker to do?

Larceny has an amusing take on this problem. The code looks straightforward enough:

The define-c-info block calculates name-offs, which is the offset of d_name in the dirent structure. %peek-string is something internal to Larceny that takes a memory address of a NUL-terminated C string and returns a Scheme string.

I had imagined, looking at this, that they had some kind of database of the headers and such, and in a sense they do -- in the form of the C compiler. define-c-info is a macro that runs the C compiler at macro expansion time, compiling and running a generated C program that spits out the relevant information as an s-expression on its stdout. 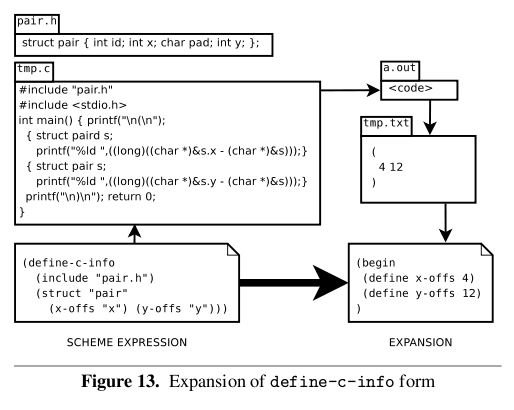 So in this case, if the d_name field starts 11 bytes into the structure, the generated C program will print out (11) on its stdout, and that number gets read in and inserted into the program. In that way dirent->name expands to something like:

Cool, no? The C compiler is only needed at compile-time, not at run-time.

Further details can be seen at Felix Klock's 2008 paper on Larceny's FFI.