V8 is faster than GCC

Do you like the linkbait title? Neither do I, but it is true in this case. Check it out.

After my last post, Benjamin noted that GCC would reduce my simple test to a mov rax, $10000000; ret sequence. Well yes, that's true, and GCC does do that: but only if GCC is able and allowed to do the inlining. So the equivalent of the test, for GCC, is to compile the g in a separate file:

Then in the main file, we have:

Here we replace N with the number of iterations we're interested in testing.

I decided to run such a test; the harness is here. I ran both GCC and V8 for the above program, for N from 20 to 231, and plotted the total time taken by V8 as compared to GCC.

Naturally this includes the GCC compile times, for which we expect GCC to lose at low iterations, but the question is, when does GCC start being faster than V8? 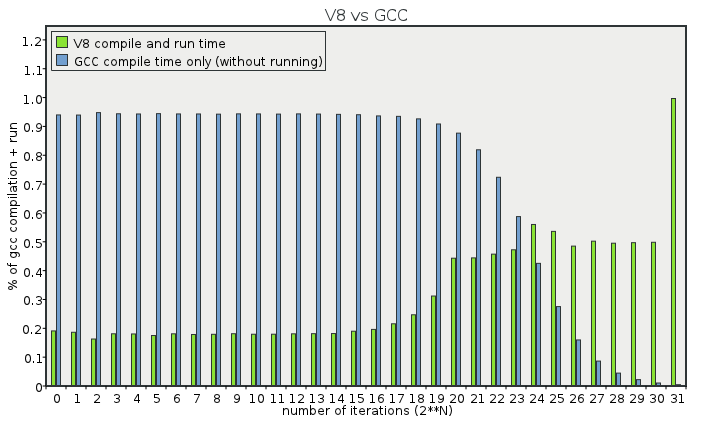 That's right, V8 is always faster than GCC, right up to the point at which its fixnums start failing. For the record, only the points on the right of the graph are really worth anything, as the ones on the left only run for a few milliseconds. Raw data here.

Why is V8 faster, even for significant iteration counts? Because it can inline hot function calls at runtime. It can see more than GCC can, and it takes advantage of it: but still preserving the dynamic characteristics of JavaScript. In this context the ELF symbol interposition rules that GCC has to deal with are not such a burden!