A DVCS survey went out recently to GNOME SVN committers, and the results came out a couple days ago. There is much nuance to pull out of the data, but I think that it's fair to say that the respondents prefer git. 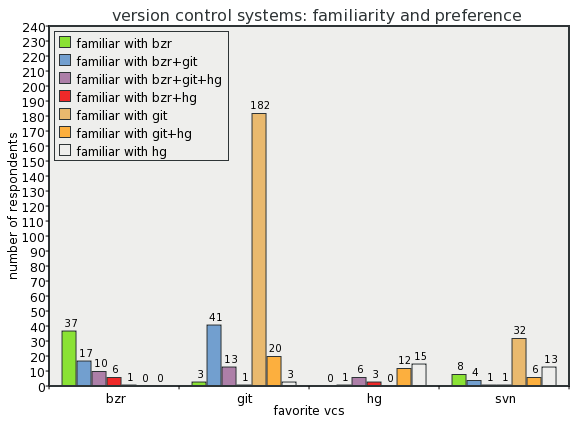 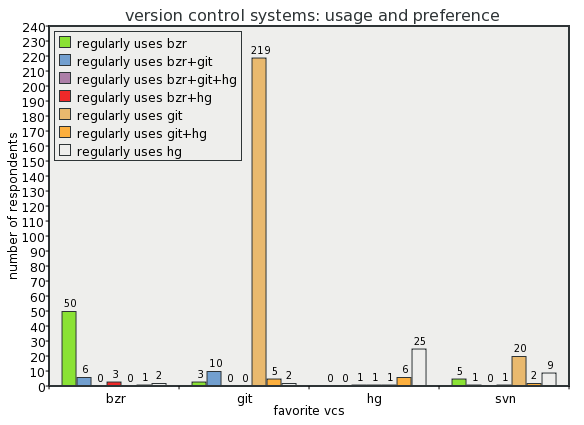 The survey was not posited as a referendum on whether or not GNOME should switch to a particular DVCS, but it certainly sheds light on the question.

Unfortunately, the resulting thread on desktop-devel has been quite nasty -- there are a lot of very legitimate concerns coming out, but even Behdad (whom I respect) at one point took an entirely reasonable post as a personal attack.

We're not here to win some kind of victory over each other, to turn other people into losers -- we're here to build something that's bigger than we are. We should remember this when we communicate. We should read at a deeper level to find out what's really on people's minds, to acknowledge those concerns, and work from there to build things, not to tear people down.

Enough of that. One of the options on the table was a really neat hack from John Carr, in which repositories could be accessed via git or bzr.

So, everyone should see this as being a pretty sweet hack, I think. But it has many downsides, and not all of them were mentioned in the ensuing discussion:

Joe Shaw has a few more.

There is of course the important caveat regarding renaming, which many git proponents fail to acknowledge. But my instincts are that if git works for the kernel, its renaming heuristic failure rate should be equivalent to the rate of me starting a new file, but saying it was a copy, or my starting a copy and saying it came ex nihilo. But that's just my feeling -- I have no data on that.

apologies from a git supporter

As one who now prefers git, I would like to apologize to users of other version control systems, especially bzr: for the VCS BOF at GUADEC that wasn't, for the tone of git proponents, for the FUD, and for a general lack of respect. And for ongoing git UI crappiness, though it has improved quite a bit.

But I think that git's the best thing going, and so do most of the other survey respondents. We should figure out a pragmatic way forward that takes all perspectives into account, and I think that Behdad's proposal is a good start.