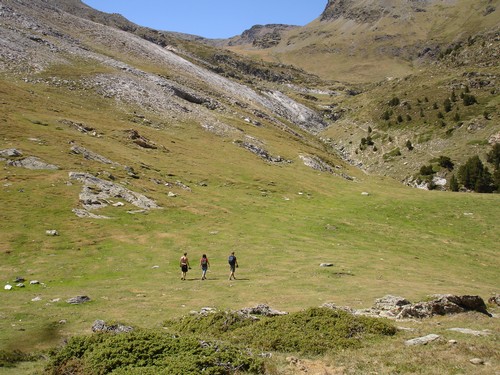 Last weekend I went with some friends up to Núria, on the border with France, straight north from Barcelona. We hiked what we're pretty sure was Puigmal. It's rather amusing that we're not exactly sure, though -- it was just a question of up-until-you-can-go-no-further.

Source events are skill-share events, with some similarity to free-form radio: The audience has a lot of input and influence on the radio, but that does not mean there is no programming.

Recently got a mail from Marek Tuszynski of Tactical Tech, a Dutch non-profit working to get NGOs to use free software. They've done a number of events in Africa, Asia, and Eastern Europe, trying to introduce local free software people to local NGOs. It's an interesting approach to development work, one that they do via intensive retreat-atmosphered "camp events".

"Camp events?" you say? The open-source meme has infected them to the degree that they wrote up a large-ish web site on replicating "source camp" events locally. There is a lot of practical event-management knowledge there; anyone who wants to create an immersive event would be well-advised to check it out.

Allow me to make a few free-association observations:

A disclaimer: I went to their Africa Source conference in Nambia, in 2004.

Meta: the hierarchy of their web site is good for navigation, but less good for reading. So for those of you interested in what they write about, you have to click-suffer a bit. It's probably worth it though. Still, a book would be better.

Is it relevant to GUADEC, GNOME's largest conference: yes and no. Yes because successful conference organization is a black art of sensitivity, preparation, chance, and architecture. They have a lot of experience in this regard.

No because GNOME has an identity already. Although it is true that the organization is people more than a reductionist "big idea", there are current memes as to what GNOME is; the organizers' responsibility to create this idea is less.

Although e.g. Quim's "be a part of GNOME 3.0" slogan was an example of an "outside" organizer seeing and mobilizing possibilities. The people sensitive enough to arrange such an experience are very rarely those that actually hack the software.

One exception in the Africa Source case was the fellow that was the head facilitator of the conference, Allen Gunn of Aspiration. You wouldn't know he was an ex-Java hacker. Truly an amazing person, with a rare understanding of people. A number of sections of the Replication site speak about him.

I can't actually recall him giving an opinion on something relevant to the conference, which was astonishingly generous: normally someone who commands that much respect is expected to opine. Instead he created a space in which people could think and come to their own understandings.

Even with all this, I'm not a big fan of the whole NGO scene. Good people mostly, but misguided I think.

I suppose I have some issues I'm still dealing with: all the times that I and the rest of the country were literally trudging through the sand in Namibia, as the 4x4 Land Cruiser emblazoned with an NGO-logo tore by, fast on their way to somewhere important, only occupied by the driver and NGO agent. Those interactions, while very subjective, are indicative of the way that most organizations "help people". Good apples exist but the system does not select for them.

meanwhile, we fatten our calves

Luis records his law school perceptions, which I find very interesting. (Since I first wrote this he's written a bit more; exercise for the reader.) The fellow has a lot of human perspective.

However, a message from Persons With A Persnickety Appreciation of Language: Luis, please never mention the word blawger ever again. Thanks! Love PWAPAL ok.