Just got back from a most rocking vacation. 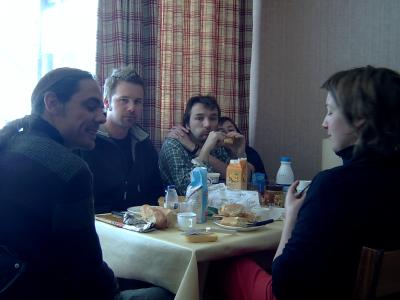 And lest he complain, here's a photo of Christian DOMINATING the slopes: 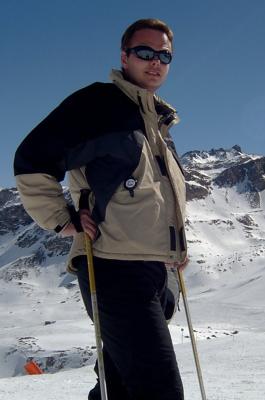 Eight days of snowboarding in the French Alps, yo. That's straight-up bourgeois of us. Fun though. I considered prolonging the experience by seducing some millionaire sugar mama, but my solidarity with the proletariat kept me back. And so it's back to work on Monday. Hope my fellow proles appreciate it.

notes from out of the womb: a naval harvest

I first left the states when I was 18. In the 7 years since then I've slept in about a dozen countries, lived in two, and spent more time out of the U.S. than in. Now I find myself in Barcelona. Not a bad place to find one's self. They tell me it's even better in the summer.

I thought, though, that this would be an easier adjustment to make than my previous ones, because I had already learned (castilian) spanish, had been in spain before, but mainly because I had already undergone this process before. That was the expectation, anyway -- just to drop right in, start functioning like a normal person-in-society.

It's a fallacious expectation of course. Anyone who's gone back home from a long stay abroad will recognize it, as it pertains to home itself. The typical example is returning home, expecting to pick up where you left off, but coming to find that neither your friends nor you yourself are the same people as before. But home does provide something of comfort, no matter how much (or little) places and people have changed in the meantime.

Which brings me back to this stressed-out feeling I've been having recently -- I think it's from not seeing Americans at all! In Salamanca I had the other students to support me, in Namibia I had the other peace corps volunteers, but here I haven't really interacted with any compatriots. Yes, the best thing to do is to integrate with people where you are, but it's so nice to share culture.

A lot of times when travelling I feel like I'm deaf-mute or something. I can walk the streets of Oaxaca or somewhere, looking at things, maybe buying something or other, venturing into bars or such, but still without the feeling of being there. It's like there's a conversation I'm not a part of, a whole set of memes and motivations lying beneath surface effects that I have no idea about. What's going on. Qué pasa. Oshike tashi ningwa. Maybe I need to consume more media.

(As in the singer, khaled)

iInteresting things that I'd like to work on, given time:

Thesis: a profiling platform should have two interfaces: one to activate and disactivate the profiling from within the program being profiled, and one to run a program from the shell with profiling.

It would be very interesting to make a real-time profile analyzer. However in the things I've profiled, and the profilers I've hacked on (qprof and guile's statprof), the analysis typically takes as much time as running the program.

Applications of continuations to GUI programming, both first-class continuations as in scheme and cheap ones like python. Continuation-passing style in GUI apps.

Looking at Gazpacho and seeing what they're up to. It seems to me that writing GUIs really really sucks, and that no one knows a good way to write one.

ESR says that you should learn lisp, that it will make you a better programmer. For me it just made me irritating to be around. "Yes, but in lisp, you just but a parenthesis here and here, and then the program writes itself!" is not very intelligible to pychecker.